Under the North Star CORRECTION OF TIME TO 1 PM

Note: The early start at 1 pm
Under the North Star - Part II 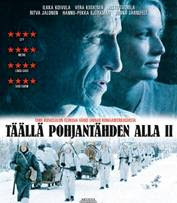 Part II of Timo Koivusalo's new (2010) adaptation of Väinö Linna's Täällä Pohjantähden alla covers the final volume of the trilogy.  Continued from Part I seen in April,  Akseli Koskela returns from prison camp to his tenant farm  trying to come to terms with the ghosts of the past.  He works for the future of his children and imagines everything will turn for the better.

The Winter War breaks out.  The people torn in two by the Civil War unite in the face of the common enemy and accomplish the impossible, but the price is high.  Akseli loses his sons before the Continuation War is over.  The country remains free, but Akseli, now the owner of his land, asks, "What sense was there in anything if nothing is left"?

In Finnish with English Subtitles