invites you to join us for a 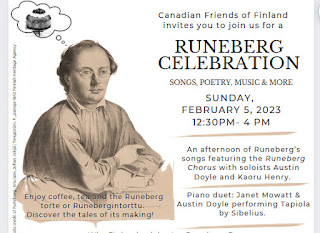 An afternoon of Runeberg’s songs featuring the Runeberg Chorus with soloists Austin Doyle and Kaoru Henry.

Enjoy coffee, tea and the Runeberg torte or Runebergintorttu.

Everyone in the lower mainland of Vancouver is invited!

Johan Ludvig Runeberg (Feb 5, 1804-May 6, 1877) was a Finnish poet who wrote in Swedish. He wrote the lyrics to a song, Our Land, which was adopted as the national anthem. His literary achievements led him to be considered the National Poet of Finland. He wrote many hymns for the Virsikirja. He was also a language teacher at a number of establishments. 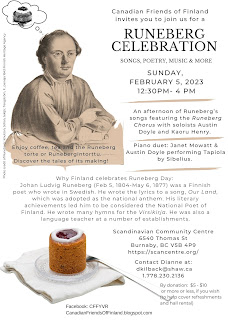 Dr. Veli Niinimaa, Ph.D., was born in Revonlahti, Finland and immigrated to Toronto with his family at the age of 14 in 1964. After completing his high school education, he graduated from the University of Toronto with a BPHE (‘73), M.Sc. ('76) and Ph.D. ('79) in exercise physiology. He taught at the Universities of New Brunswick and Calgary for four years. Veli's sport career began in 1973 when he joined the University of Toronto cross-country ski team and coached it for the following five years. His organizational skills were tested when the home team hosted the annual inter-university competitions in Midland, ON. He arranged the race details, coached the team, raced, and even won a medal a few times. In 1978 Veli started in biathlon at a race at the Kitchener Pioneer Range.

TAKE NOTICE: The Annual General Meeting of Canadian Friends of Finland will take place at the Scandinavian Community Centre 6540 Thomas Street, Burnaby on Friday December 17, 2021 at 2:00pm to:

1)    Consider the Reports of the Directors to the members.

3)    Elect Directors for the coming year

4)    Transact such other business as may properly come before the meeting.

Masks and proof of vaccination required to attend CFF AGM

By the order of the Board of Directors of CFF.

Email ThisBlogThis!Share to TwitterShare to FacebookShare to Pinterest
Labels: AGM

Thanks to the covid-19 pandemic I had time on my hands to do some research on the history of Finnish Immigrants to British Columbia.  Searching the internet, I discovered the website for the Maple Ridge Museum.  I was happy to learn the museum had the history of Websters Corners in their archives.   Websters Corners was settled by Finnish people who left Sointula in the early 1900’s after a disastrous fire and differences of opinion in the community.  A group from Sointula founded a community in Websters Corners.  I was pleased to discover there was a book Maple Ridge: A History of Settlement at the Museum.  I contacted Val Patenaude, Director of the Museum and decided to buy some copies of the book.  The Museum has been closed due to Covid-19, but I was able to go and pick up the books through the door of the Museum.  There is a chapter on the Finnish People of Websters Corners.

Here is a quote from that chapter that made me feel proud of my Finnish Heritage.

Operation Ankka - This is a story about a duck. By Geoff Ballance

As is often the case with duck stories, it begins on a cool, misty summer morning by a lake in Finland.  My partner Christina and I had been staying at her cousin Tapani's kesämöki, exploring the lake and surrounding countryside.  Perched at the end of a small peninsula, the cottage is situated in the ideal location to enjoy the unavoidable peace and tranquility of rural eastern Finland.  But alas, our time here had come to an end.  It was time to head back to Canada.

I grabbed our bags, threw on my jacket and stepped outside. The faded wooden deck was slowly being painted a polka-dot motif as light rain began to fall. I filled my lungs with cool pine-scented air that crept up from the lake and across the moss-covered forest floor. 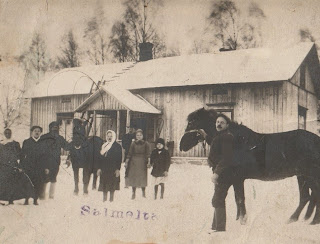 Back from the dead: World's oldest Saimaa ringed seal sighted after 28 years

A rare Saimaa ringed seal long thought to be dead has been sighted in the southern Saimaa region in southeast Finland. According to WWF Finland regional head Ismo Marttinen, Venla was photographed in the area in late April 2020.

"When Venla was transferred to southern Saimaa, she was estimated to be at least five years old. That means she is now at least 33 years old. That makes Venla the oldest surviving Saimaa ringed seal," Marttinen said.

Venla’s habitat is now part of the Taipalsaari municipality. She was also sighted after May Day and the most recent photos of her are from May. She has given birth to many pups during the 28 years she spent in southern Saimaa and still seems to be full of life.

Conservationists suspected that Venla may have left the area or died when no confirmed sightings of her were reported for some time.

"It’s known that seals do live long. The default for a Saimaa seal is more than 30 years," Marttinen observed.